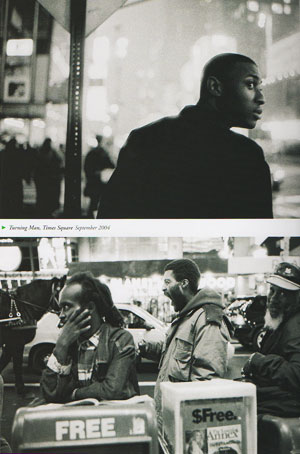 This summer Andy Summers, guitarist extraordinaire, with legendary group the Police will team up once again with Sting and Stewart Copeland, the other two members of the band, for the first time after more than two decades apart, for the start of a world tour. These three made up one of the world’s most famous groups conquering the world with their talent good looks and music, but broke up amongst rumours of acrimony, arguments and personality clashes in 1985.

All three have continued making music, with successful solo careers, and the reaction to the news of the reunion has exceeded any expectations the group ever had; the tour is now a total sell-out for the next ten months.

Apart from being considered one of the world’s leading guitarists Andy Summers is also a talented and accomplished photographer. Along with the tour, this summer a book of his 600 of photographs is being published by Tachen. Called I’ll Be Watching You: Inside The Police the photographs were taken between 1980 and 1983 during the height of the Police fame and it’s a brilliant insightful and fascinating documentation of that time.

I met Andy Summers in London on his way to Sting’s house in Tuscany where they are rehearsing for the forthcoming tour, and I asked him about his passion for music and photography.

1 How does it feel working together again as a group after so much time apart?
In a weird way it feels like it was only 5 minutes that we were all playing together. I have known these guys nearly all my life and we packed so much into our time together. Even though were together only 8 years it was more like 30. We packed in about 30 years of life into that short time and the impact of it was huge. Also we have all carried on being surrounded with what we did then, because we stayed deeply steeped into the fabric of the music and that industry. The phenomenal success and sell out of this reunion proves the immense popularity of the band and that has made us all very happy. Do you know how long it took to sell out Madison Square Garden? Precisely four minutes! Its hard not to smile every time I think about it!

2 When you were together in the group it always seemed to be a volatile relationship between the three of you. How do you think it will go this time?
To begin with when we first started rehearsing I could feel the old tensions between us. We are not particularly mellow guys, in fact we are all quite pushy and tensions were building up. At one point I thought this is not going to work, but then suddenly things got better and we started joking around and enjoying being together. I love playing all those songs, we have never forgotten them, they are burnt into our absolute cores. I never stopped thinking about Sting and Stewart, even thought I didn’t see Sting very often because I live in LA. But recently when we met, we couldn’t stop talking. The connection is there for all of us. We still say the same insulting things to each other as we always did, but no offence is taken. We’re that much older and that much more confident. Any way, I think we are all more at ease with our own selves now and although we have had our differences in the past, the arguments and animosity have always been hugely exaggerated. If there was any real animosity between, us we just wouldn’t be getting back together again. In a way it’s quite good that people think we hate one another because they’ll come to see us, wondering if we might end up fighting, and that keeps the energy and tension going which is always good for a performance.  If you have three strong, intelligent individuals with three different personalities there would always be a strong chemistry between them. It was not a mellow scene and that’s why we made the music we did. The reason the music was so powerful was the way the three of us related to each other as individuals; without the creative conflict that powerful music would never had emerged.

3 But the press always loves to report and imply that there was and still is, a lot of competition and acrimony between the three of you. What do you say about that?
That’s rubbish that we didn’t get along. We had a lot of passion and a lot of comradeship. Passion creates friction, but we had a great fraternity between us, and still do. There was never any acrimony. You don’t pass through something like we did, having such incredible fortune, luck and fame and feel acrimonious towards each other. The press always likes to report the negative side of things…I don’t feel acrimonious towards Sting and Stewart; I love them, actually and they’re a major part of my life, as I am of theirs.

4 Who’s idea was it to get back together and what was the main reason for doing it apart from the obvious financial rewards?
The idea didn’t come from any one particular person…we talked about it in the past but the time was never right. This time it felt right, and of course the money was a big incentive but not the only reason. When we split up we didn’t really formally discuss it. We just went away and never came back. I felt that when the band ended, we hadn’t made enough albums or used up all our creative energy… we had more to give. We broke up without saying good buy to the world properly and in a way this is a chance to make up for that. First it was going to be a four months tour and now it seems indefinite.

5 What motivated you to start taking pictures when you must have been very busy with making music?
At the beginning it was simply just taking pictures of places and people. I always loved taking photos even when I was a kid. I started taking photography seriously about the time I joined the Police, probably because I could afford to buy a decent camera. When I went on the road with the Police I used to take my camera everywhere and document everything. I stared with hotel rooms, the beds I slept in and the maids who came in and out. Then I progressed to taking pictures of us on stage and back stage and basically everything. I suddenly realised that I was making a documentation of our lives, so I just continued always having a camera with me. It was almost like making a movie. I sort of got obsessed. I would photograph us on stage while performing and some times I would set the camera to the side of the stage and activate it by hitting buttons on my guitar-pedal board. I would be performing and photographing at the same time. The Police was this absolute major band and shooting it from the insight was something that hasn’t been done before. Also photography became a way to alleviate boredom when we were on tour. At the height of our fame, when we were touring it was crazy and we stopped going out. We spend most of our time in the hotels and photography helped me stay sane. I could say to myself that I’m not just this moron in a hotel room getting wasted, but it made me feel like a normal person and helped me make sense of what we were going through at that time.

6 You’re a very keen and good photographer what is it about it you love so much?
The thing about photography, is that it shouldn’t’ be about anything specific, but about visual perception. I always carry a camera around with me even now. I love the way some times the camera leads me into all sort of adventures. I just follow the lens and it takes me to places that I would never have thought of going. Once I got arrested in Argentina for photographing an interesting building which turned out to be a bank!

7 How did your rock and roll life style effect your personal life?
Fame can be a scary thing. It does strange things to people. With so much adoration is impossible not to feel slightly elevated from everyone else and this is difficult for other people to live with. Now my family are an absolute priority to me. But it was a totally different story when I was in the band. I met my wife Kate who is American, when I was a student in the US and we were already married by the time I joined the Police. The huge success of the band and the heady heights we achieved along with all the sex and drugs and ‘rock-n-roll’ were not compatible with the family life Kate wanted for us and our baby girl. We ended up getting divorced but always kept a good relationship going for the sake of our daughter. However, a couple of years after the Police broke up, Kate and I reconnected again and we eventually remarried and we had our twin boys who are now 20.

8 You are about to embark on being on the road for a long time again and away from your family. How will you stop what happened last time happen again?
It will be difficult but I’m I hope it will go ok. We start in Vancouver in May and I don’t go back home till August which is a long time away from them but there will be times of rest and going back home for a short while. Also the family can come and visit me while on tour. My boys want to come and see me, and they can do that when ever they want. I’m preparing myself for a maximum tour of a year and then stop. Last time it was different. I’m older and wiser and have the experience of what happen before. My family is a priority and it won’t effect it. My boys are really excited to see the band on stage…they hear about it and know about it but have never had the Police experience so I’m really looking forward to that.

9 Did the other members mind the photos being taken or did they ever think it was an indrusion?
They didn’t seem to mind. They actively enjoyed it. I got such fantastic shots of them they were very flattering, photos that no one else ever got of them so they loved it…

10 Looking back at all the pictures when you were editing the book did you feel nostalgic?
Yes there is an element of nostalgia, remembering the places we went to, the people we met. But above all looking at all those photographs from that time is like a piece of history…a period piece! Seeing how young everyone looked and remembering how we felt…it’s nostalgic, it’s sweet. The funny thing is that we will be doing all that again now, but coming at it from the top this time…and with knowledge…not climbing to get there.